With four hours (times two) to ponder  this week, I have thought about many of life’s questions including:  What do standardized tests measure?  We know that these tests give a “precise number or score” that allows us to sort and label (creating data points), providing a way to compare students, classes, schools and districts.  They provide reliable, fair and valid results of mastery of information or curriculum.  This data helps us decide if our instruction has been effective and the next steps for students’ learning.  The need for “Accountability” for our schools and teachers has deepened the level and need for our standardized testing. However, is that what they really measure?

Watching my test taker, I thought, “What is this test going to tell me about this child that our school does not already know?  I watched his determination and the stamina he showed as he progressed hour after hour. He worked meticulously, repeating the procedure he must have spent daily learning with his teacher.  My mind began to drift to other students that I worried about—would they be able to give the same effort for this duration? Would students with anxiety shut down? Would students who lacked confidence begin to feel sick and worried?  Was this test showing their capabilities?

My thoughts then turned to a memory of a young boy with clear dancing blue eyes. This fifth grader’s standardized tests told me that he was above proficient and had the knowledge base for the next school year and on track to being career and college ready. What the standardized test score did not measure but that I knew was that his family life was unstable, he had an extreme need for peer acceptance and a long history of absences and tardiness. The test score could not predict that I would again look at that child, ten years later. His blue eyes, which had become cloudy as he sat inside of a correctional center with his head hung low. He shared his story with me of stealing from cars to keep up his meth habit and I remembered his need for acceptance and belonging, even in fifth grade.  How did the standardized test miss that?

Another child’s face that flashed in front of my eyes was Carissa. She worked so hard and gave all she had during her fifth grade test.  In fact, she had showed up for tutoring three times a week all year but had not passed one single test, she took in elementary school. She had continued to struggle with basic reading even with intensive interventions.  What her test score did not show was the determination she possessed and that she would exceed far beyond her abilities. Twelve years after her 5th grade standardized test scores, her sweet voice and calming spirit held the hand of my frightened grandmother in the hospital.  Despite the data of her testing, she was making the world a better place and succeeding as a nursing assistant.

Dozens of faces and stories flood to my mind when I think that standardized tests do not always measure what good teachers already know.  Teachers see the compassion that will make them nurses, teachers, and social workers. They see the character traits that will help students aspire to greatness or the traits that will cause them to struggle with life and their peers.  It takes teachers knowing and understanding the whole child, including their personality, likes and dislikes and helping them to build on weaknesses and gain strength from their success.  Success of a child requires teachers knowing and helping them to mold their character, which ultimately affects their performance, relationships and outcomes.

As we move through this testing season, keep in mind that numbers are real but only tell part of the story. What traits do you see that will make this child make the world a better place?  What traits do we need to work on to ensure their success? At some point, as they continue through life, it is not the test score that will hold them back and keep them from attaining—it will be themselves.  Somehow, in this age of testing, we as educators must find a way to use this data but keep in mind the “rest of the child.”  Keeping a focus on the traits, they are developing to become a strong, vibrant citizen that will make our world a better place.

Think about these traits. Not one is measured by a standardized test. 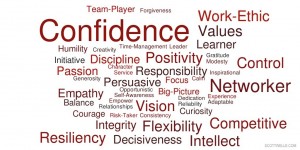 Each child has a story that is being written daily by the experiences they have, knowledge that they gain, the people they know and interact with  and most of all the events  in their lives.  I challenge you to look at your data over the weekend and begin to think of the untold story behind that data.  We, as a school,  will continue to help write each child’s story.  What do we want it to say?  What can we control?  What do we, as individual educators need to do to help ensure success of this child? How can our school build the traits and pieces of the story that are worn, broken or missing?  As a school, let us focus on the WHOLE STORY and build students who have the traits that will make them successful. The reading, math and writing are certainly part of the story and a focus we need to have. However, don’t you think there is SO MUCH MORE?

As the school year closes, brightly colored displays and children’s laughter are replaced with storage bins brimming with last year’s ideas.  Teachers work quickly to close out the year and talk excitedly about what the summer holds. Something else happens behind the scenes that others rarely see…standardized test data is being examined and analyzed.  Numbers are crunched, proficiency and growth calculated.  With this a slow veil of “standardized fog” begins to permeate our school.

On one of our workdays, we began to look at our data and make discoveries about our year. How did we do? Were we successful? What could have been improved?  Within our discussion, one teacher exclaimed, “These are not just reds, these are children!  That is amazing that we cut that number in half because these are children.”  This statement was real and powerful because at that moment, I looked at each chart and each number just a bit differently.  Everyone in that room knew that we were looking at children’s scores but had been looking at it with a self-critical eye not a teacher’s heart.

School level data discussions are a precursor to the county and state level data that will soon follow.  The data immediately sweeps in to exalt the school to the heavens or becomes a fog that settles in and blurs the reality and success made.

The data displayed on graphs with numbers make it easy to locate weaknesses, but when you attach a child’s face to the score—things are different.  A chart showing 7 students with non-passing scores looks like a failure, but upon closer evaluation, these 7 students all grew at least a level—Is that a failure or a success?  Another chart showing 77% proficient certainly looks like a success until you look deeper to see that 26% of those students fell a level from last year.

As you hear about school report cards and rankings, please keep in mind that you may see a silhouette of student and teacher success or failure against the haze of data you view but ask–Is it an accurate portrayal?

Data is a marvelous tool to help us grow as educators, however,  it is important to remember as we are being ranked against one another and graded, it is simply a piece of information.    We can allow the use of data to help us focus on the important details through the haze or we can allow it to veil our vision.   My hope for all of us is to rejoice in our successes, accept our weaknesses, and remember the children behind the numbers. It is these children that we work for each day, and their progress is our top priority—THEIR PROGRESS—we need to celebrate that.